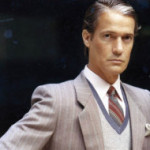 The son of a highly respected Brazilian general, Otto de Souza Aguiar graduated with honors and was awarded a Master’s Degree in Graphic Art and Drawing from the University of Fine Arts in Rio de Janeiro, Brazil. After teaching drawing and design to aspiring architects, Otto began the extensive travels through Europe that were his induction into the world of High Fashion and Interior Design.
As one of Brazil’s top models, his engagements took him to Milan, Paris, and London. There, with his assignments in Harper’s Bazaar Italia and others of the world’s most prestigious publications, Aguiar developed an inspired aesthetic perception, which manifests itself boldly in his dramatic blending of sumptuous color, texture and gilding.
Uncompromising in his thirst for creativity, Otto has combined his vast fashion and theatrical background with his diversified experience in the Visual Arts. Thus, his work has been characterized by the portrayal of elegance and grace. His inner tranquility manifests in his paintings as he recaptures the lush topical beauty of the Brazilian beaches and gardens of his youth. Aguiar was greatly inspired by the timeless charm and romance of the Baroque and Colonial period of Brazilian history, particularly evidenced by the use of architectural elements in his imagery.
Characteristic of many of his works is the umbrella. Extremely sensitive to man’s spiritual disintegration, to Aguiar the umbrella symbolizes the shield of hope and protection, a covering for all humanity. He feels his work is the direct tribute to God who has inspired and directed his life, and he aspires to portray the beauty of God’s creation in all that he does.
Although the artist has received numerous awards and honors for his painting, he believes that the most important gratification comes from those who are able to perceive the joy and harmony expressed in his unique work. Renowned for his masterful integration of trompe l’oeil and unique figurative style, Aguiar’s work has been an extraordinary enhancement to residential, public and corporate settings on several continents, for almost 30 years.