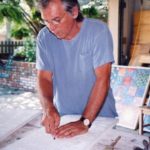 Tony Krysinsky is originally from New York. Raised on Long Island where he began drawing and painting as a child and never stopped. Drawn to the coast, even as a youngster, he started surfing at 13 and by the age of 18 those New York winters were too long and too cold. Florida has been his home ever since.

Tony did his undergraduate work in Florida where he received his BA in fine arts. Moving to New Orleans for a time, where he got his MFA from Tulane University.

The sights and sounds of the “Big Easy” would become a lasting influence in his work. Music in general has definitely been a big part of his life. Playing and singing in R&R and R&B bands while he still continued to work on his visual art.

These days Tony makes his home, his art and his music in Perdido, on Florida’s Gulf coast, where he still finds time to surf and Stand up Paddle board with his family.
If you’ve met Tony at any of the art festivals, chances are you’ve met his wife Jean, their son Kyle and Kyle’s dog Mira.The whole family goes whenever they travel. Kyle is challenged with autism and Mira is his service dog/constant companion. Tony and Jean support Autism research and Canine Companions for Independence by donating artwork throughout the year for fundraising events.  As it is with most of us, Family is the focus for Tony. So stop by and meet the Krysinsky family next time they are at an Art show near you.
You can see some of Tony’s designs on his website:
http://www.tonykrysinsky.net